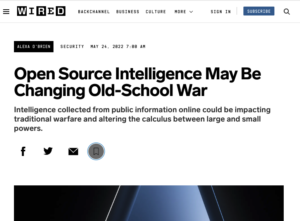 I have an article published in WIRED about how open-source intelligence may be changing the balance of power between large and small powers in conventional military conflict.

“One consequence of widely available open source information is that anonymity is eroding, not only for ordinary civilians, but also for members of law enforcement, military, and the intelligence community. Even missing information can alert an adversarial spy service, says a former US intelligence official who spoke on background. When the US State Department unfolded a public diplomacy strategy in 2008 that emphasized the use of social media, a foreign counterpart joked to the former US intelligence official that CIA officers, working under nonofficial cover at US embassies, were easily deduced because they lacked Facebook profiles. The US government has a gargantuan effort underway to address similar issues brought on by an absence or expectation of digital exhaust associated with intelligence officers cover identities.”

You can read that article here.