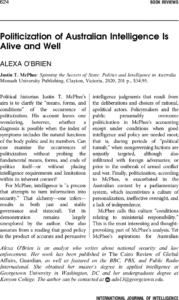 My book review of Justin T. McPhee’s Spinning the Secrets of State: Politics and Intelligence in Australia was published in the Fall 2021 issue of the International Journal of Intelligence and Counterintelligence. You can read that review here.

The question extends to a regime’s placement within international relations. Historically speaking, Australian intelligence requirements appear to have been politicized adversely by the government’s relationship to the United Kingdom, a larger power, which had unique strategic objectives and security concerns that overcame the latter’s.

You can purchase McPhee’s book, Secrets of State: Politics and Intelligence in Australia here.