This is a case involving a criminal conspiracy that taken together are summed up in Counts 1 (conspiracy to obtain, receive, and disclose national defense information or NDI); and 18 (conspiracy to commit computer intrusion) of a classified Department of Defense network.

All counts -- excepting Counts 15 and 16 where Assange is the so-called proximate publisher of names of cooperative Afghans and Iraqi -- rely on a theory of direct conspiracy between Manning and Assange.

The US criminal theory in the superseding indictment against Julian Assange has three main parts:

(A.) Prior to the March 2010 agreement (and since at least November 2009), Assange and Chelsea Manning were in communication, i.e. while Manning was illegally exfiltrating and disclosing Secret information stored on a classified Department of Defense network to WikiLeaks;

(B.) When Assange agreed to help Manning on March 8, 2010 attempt to bypass the administrator password on her classified computer (so she could surf SIPRNet anonymously to exfiltrate more classified information for Assange and WikiLeaks), Assange knew that Manning had been and was attempting to illegally exfiltrate Secret information from a classified Department of Defense network;

(C.) After the March 8, 2010 agreement, Assange continued to encourage Manning to illegally ex-filtrate Secret information from a classified Department of Defense network.

All the charged documents cited under Espionage Act Counts (excluding SIGACTS) post-date the beginning of Jabber chats. (See my special comments below regarding Iraq ROE files, which were leaked the day before those chats)

There are an unknown number of charged documents tied to each espionage Count that the US will disclose during pretrial.

The US is using a *different* set of charged documents for the espionage act Counts in the Assange prosecution, than it did in the Manning prosecution.

The US did provided four classified SIGACTS (two from the Afghanistan and two from Iraq CIDNE databases) and five classified diplomatic cables from the NetCentric diplomacy database as examples of charged documents (see pages 13 and 14 of the superseding indictment).

These nine documents all specifically tie to the three Counts for unauthorized disclosure described in the superseding indictment as the publication of classified information containing the names of cooperative Afghans and Iraqis in the SIGACTS; and foreign intelligence sources in State Department cables.

Generally, however, there are two types of charged documents for the espionage Counts in the Assange prosecution:

(B.) During and after Jabber chats with Assange: The Jabber chats started on February 22, 2010, the day after Manning leaked Iraq ROE files. The charge material is (1) classified documents and/or information that Assange and Manning attempted to hack when they attempted to change the admin password on her classified computer that was stored on SIPRNet; (2) GTMO detainee assessment briefs stolen and leaked sometime between March 8 and 22 during their chats; and (3) State Department cables stolen and leaked sometime between March 28 and May 5. For numbers (2) GTMO DABs and (3) State Department cables, the material was leaked using WikiLeaks drop box.

That Assange consulted with Manning about the processing and imminent publication (on April 5, 2010) of the 2007 Apache video (which was published with the Iraq ROE files) weeks prior, and also the possibility of confidential informants or other evidence coming to light at trial, for now I would consider Counts 4, 8, & 14 (Iraq ROE Files) as part of the criminal theory of a direct conspiracy.

Notably, Manning and WikiLeaks diverge on accounts about the 2007 Apache video WikiLeaks edited and entitled "Collateral Murder" that relate to that publication. WikiLeaks claimed the 2007 Apache airstrike video was encrypted. Manning testified at her court-martial that it wasn't (it wasn't).

In January 2010, WikiLeaks had claimed to have an encrypted video of a bombing. 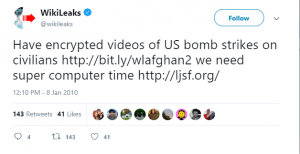 Then on or about day or day after Manning uploaded what she claimed was an un-encrypted video of the 2007 Apache strike, WikiLeaks then claimed, they decrypted the video. 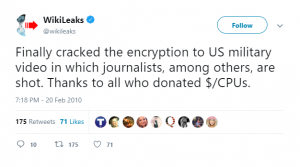 While this is all happening, a WikiLeaks associate, Jason Katz, had the January 2010 encrypted video that he was trying to decrypt surreptitiously at Brookhaven National Labs. That video came from the CENTCOM server. Katz got caught. There was an internal investigation heating up, and his computer was seized in late February 2010, just as Manning uploaded the unencrypted Apache airstrike video.

Arguably, calling 2007 Apache video encrypted looks like an attempt to cover a Katz & WikiLeaks connection, just as Katz's computer has been seized. Also suggests there may be more to the Iraq ROE files than is public. Given Kim Zetter's reporting (based on an interview with Katz) where Katz reveals how he came to find himself attempting to decrypt the January 2010 video via an IRC channel for WikiLeaks (that Manning herself frequented according to her own testimony at her court-martial) there is much here we should anticipate learning more about at any Assange prosecution.

See also WikiLeaks Twitter signalling about State Department surveillance around the time that Manning was uploading State Department cables. In addition to the possibility of confidential informants, or unknown evidence, there are tons of circumstantial evidence available here, just based on the public record (for both Iraq ROE files and State Department cables which post date the Jabber chats).

The mens rea for the espionage charges relies on the conspiracy discussed above.

You see that in Counts 9 to 14 regarding unauthorized disclosure; where by attempting to hack and encouraging Manning after the release of material, the US is arguing that willful communication is Manning to Assange.

The US only brings up leaks stolen and leaked prior to the Jabber chats in the context of a component of Count 1 (which pertains to the overall conspiracy); and Count 15 and 16, which relate to Assange as proximate publisher of classified information containing names of US military cooperative (SIGACTS). Count 17 is the same kind of charge for State Department foreign intelligence sources contained in classified information leaked post chat.

The mens rea for Espionage Act charges includes for each charge respectively: reason to believe, knowledge, and/or intent; and/or willful (i.e. done voluntarily and intentionally with specific intent to do something the law forbids).

This is how the US generally describes the mens rea for the Espionage charges against Assange (different statutes have different requirements):

(B.) Assange knew the value of the information to the US (i.e. that its value, including monetary and/or in it being restricted) [para 2 & 22];

(C.) Assange intended to harm the US by depriving it of the value of the classified information;

(D.) Assange knew that publishing the names of foreign intelligence sources, as well as cooperative Iraqis, and Afghans could endanger them[Section G];

(E.) Assange willfully published the names of foreign intelligence sources, as well as cooperative Iraqis, and Afghans of the US;

(F.) Assange willfully threatened the US with disclosure of even more damaging information (by doing so he also is evidencing requisite knowledge that the information could harm the US were it released);

The general gist of the mens rea and charge documents when considered together goes something like this:

The US alleges that Assange (in conspiracy with Manning) unlawfully obtained and aided, abetted, counseled, induced, procured and willfully caused Manning to obtain the GTMO DABs (Count 2), State Department Cables (Count 3), Iraq ROE files (Count 4) with reason to believe it was to be used to the injury of the United States, or to the advantage of any foreign nation, i.e. by participating in a conspiracy, Assange knew (1) he would deprive the US of the value of the information;

The US alleges that Assange (in conspiracy with Manning) attempted to receive and obtain information stored on SIPRNET by attempting to hack a classified Department of Defense network (Count 5); it also alleges that Assange obtained or received without authorization the GTMO Dabs (Count 6); State Department cables (Count 7); and Iraq ROE files (Count 8), knowing and having reason to believe that it was illegal. (All this material post dates Jabber providing for my caveat about Iraq ROE files).

There are two sets of charged documents that deal specifically with unauthorized disclosure Counts against Assange:

Counts 9 to 14 (793(d) & (e)): The charged documents are GTMO DABs (Count 9 & 12), State Department cables (Count 10 & 13), Iraq ROE (Count 11 & 14). For disclosure of the GTMO DABs, Iraq ROE, and State Department Cables (Counts 9 to 11 or 793(e) and Counts 12 to 14 or 793(d)) the US is *specifically* defining that the unauthorized disclosure is from *Manning to Assange* (as part of the overall conspiracy). The US alleges Assange acted knowing and willfully (i.e. in illegal conspiracy with Manning) to deprive the US of the value of the classified information.

Counts 15 to 17 (793(e)): The US is defining unauthorized disclosure for these Counts as publication of an unknown number of classified SIGACTS and diplomatic cables containing the names of cooperative Afghan and Iraqis (SIGACTS) and foreign intelligence sources (State Dept. Cables). Count 1, 15 & 16 are the only charges specifically listed charged documents that pre-date the Jabber chats by more than a day, vis. SIGACTS.

The US is essentially alleging here that Assange knew that publishing the names of foreign intelligence sources, as well as cooperative Iraqis, and Afghanis could could endanger them, and injure the US or be to the advantage of a foreign nation. His threats to disclose more damaging information (i.e. unredacted information) evidences his willfulness and knowledge of the harm it could cause to the US.

Send this to a friend