Defense One Op-Ed: ‘Where is the Coverage of Civilian Casualties in the War on ISIS?’ 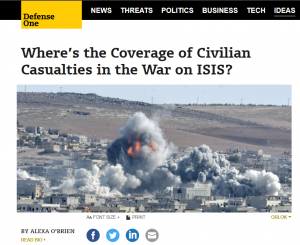 You can read my op-ed about the findings of the news Airwars report that I authored about US news media coverage of civilian harm in the war against so-called Islamic State at Defense One.

“Airpower-dominated conflicts, especially when they are conducted without large contingents of U.S. ground forces, should get greater scrutiny and more consistent oversight by major media institutions, not less. U.S. involvement in conflicts in places like Niger and Yemen, for example, have been shown to have occurred without Congressional awareness. Moreover, in the absence of reporting by the U.S. media, the subject does not simply disappear. Accounts of civilian harm alleged against the U.S. and its allies are reported on by the local and foreign press as well as by belligerents to the conflict, including by U.S. adversaries. Consistent and balanced reporting about civilian harm by the U.S. media can adjudicate biases and mitigate distortion. On-the-ground reporting enables media professionals to fact-check allegations and U.S. government claims about the true costs and progress of the war.”