Breakdown on the Imminent Verdict | US v Pfc. Manning

Pfc. Manning is charged with 22 offenses under the Uniform Code of Military Justice. He pled to 10 lesser included offenses and currently faces up to 20 years. Manning will face life plus 154 years in a military prison if convicted on the prosecution’s case.

The presiding military judge, Col. Denise Lind, will announce her findings on Manning’s guilt or innocence at 1:00 p.m. EST on Tuesday, July 30. Below is a breakdown on how the judge could rule on the verdict.

Unlike a federal criminal trial, where sentencing occurs after the creation of a pre-sentencing report, if Manning is convicted of any of the charges, a sentencing case will commence immediately. During the sentencing case, both defense and the prosecution will present evidence, call witnesses, and make arguments about appropriate punishment.

The maximum sentences for the charged offenses are outlined in the Manual for Courts-Martial and Lind’s previous court rulings.

Since the court ruled that motive and actual damage (or ‘lack of damage’) evidence was not relevant at trial (except to prove circumstantially that Manning was cognizant of the fact that the enemy used the WikiLeaks website), evidence of Manning’s intent and the impact of the leaks will finally be heard by the court at sentencing.

It remains to be seen, however, how much of the sentencing phase of this trial will be open to the public, since the government is expected to elicit testimony from these 13 classified sentencing witnesses in closed sessions or in classified stipulations.

The 16 separate offenses under Charge II General Article 134 include:

The five separate offenses of Charge III Article 92 or a ‘failure to obey order or regulation’ include:

Manning could be found guilty or innocent of aiding the enemy.

If he is found guilty, he faces life in prison.

Manning could be found guilty or innocent of “Wanton Publication of Intelligence”.

If he is found guilty, he faces up to two years in prison.

Manning pled guilty to seven lesser included offenses of the Espionage Act for “unauthorized possession” and “willful communication” of:

Manning pled not guilty to an eighth violation of the Espionage Act for an unclassified video of a May 2009 U.S. bombing in the Farah Province of Afghanistan, known as the Garani video.

Manning is not likely to be found innocent for the seven offenses that he pled to a lesser included offense for. NB Despite Manning’s plea, Lind must still “find” Manning guilty for each crime.

The maximum punishment for each lesser included offense for “unauthorized possession” and “willful communication” is 2 years. So, he is already exposed to 14 years for his LIO plea for seven Espionage Act charges.

Manning could also be found guilty of “attempt”, which is a lesser included offense of each of the eight Espionage Act charges.

Manning also pled guilty to the lesser included offense of two charges under the Computer Fraud and Abuse Act for ‘knowingly accessing’ and ‘willfully communicating’ 117 U.S. Department of State Cables. He is exposed to four years on his LIO plea.

Military prosecutors moved forward on the greater offense, despite Manning’s plea, for “exceeding authorized access” for 116 diplomatic cables. Manning could be found guilty of the greater offense or guilty on his plea to the lesser included offense.

He will not likely be found innocent for the two charges under the Computer Fraud and Abuse Act, because of his plea to LIO.

Manning could be found innocent or guilty of each of the five offense as charged. He would face up to ten years if convicted on the greater offense for each databases (Iraq War Logs, the Afghan War Diary, the GTMO Files, NetCentric Diplomacy, and the Global email Address List).

Manning could also be found guilty on a lesser included offense for attempt or if military prosecutors fail to establish the value of each of the five databases at more than $1000.

NB If convicted of the lesser included offense for “stealing, purloining, or knowingly converting” the Department of State NetCentric Diplomacy database, Manning faces five years maximum punishment, because it is a non-military database.

In a recent controversial legal maneuver, Lind ruled military prosecutors could change the charge sheet after both defense and the prosecution had rested their cases– nineteen months into the proceedings, on July 24.

Military prosecutors conceded after the close of evidence at trial that Manning did not steal the entire database for three charge offenses of stealing the CIDNE-Iraq (Iraq War Logs) and the CIDNE-Afghanistan (Afghan War Diary) databases and the US Forces-Iraq Microsoft Outlook Global Address List. The Court ruled the databases were equivalent to the records contained within them. Defense has moved the Court to reconsider its ruling. The judge is expected to rule on the defense motion for reconsideration prior to announcing her verdict.

Manning pled guilty to one of five offenses charged under Article 92 for a failure to obey a lawful general regulation” for wrongfully storing classified information. He is not likely to be found innocent on his plea to that offense, and faces up to two years.

Manning could also be found innocent or guilty of four other offenses under Article 92, and could be convicted of up to two years for each offense he is found guilty of.

Go here for a sortable list of the charges and Manning’s plea and their maximum punishments. 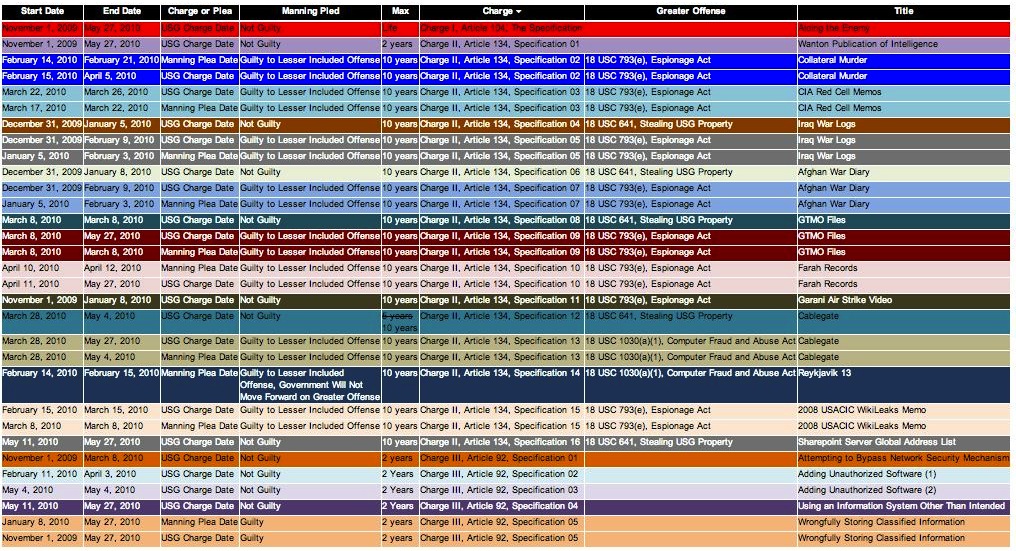