a. In order to inquire into the truth of the matter alleged in the charges, consider the form of the charges, and assist the Investigating Officer in making recommendations as to disposition of the charges. See Rule for Courts-Martial R.C.M. 405(e);

b. In order to serve as a means of discovery for the defense. The defense has repeatedly requested the below discovery in this case, but the government has consistently responded with a blanket denial of the defense request. See R.C.M. 405(a) Discussion (stating the “investigation also serves as a means of discovery” for the defense); R.C.M. 405(g)(l)(B)(stating “evidence, including documents or physical evidence, which is under the control of the Government and which is relevant to the investigation and not cumulative, shall be produced…”);

4. The defense specifically requested an Encase forensic image of each computer from the Tactical Sensitive Compartmented Information Facility (T-SCIF) and the Tactical Operations Center (TOC) of Headquarters and Headquarter Company (HHC), 2nd Brigade Combat Team (BCT), 10th Mountain Division, Forward Operating Base (FOB) Hammer, Iraq. The defense has previously requested these items in discovery and filed a preservation of evidence request with the government. An inspection of all seized governmental computers from the T-SCIF and TOC would allow the defense to provide evidence that it was common for soldiers to add unauthorized computer programs to include, but not limited to: mIRC (a full featured Internet Relay Chat client for Windows that can be used to communicate, share , play or work with others on IRC networks); Wget (a web crawler program designed for robustness over slow or unstable network connections); GEOTRANS (an application program which allows a user to easily convert geographic coordinates among a wide variety of coordinate systems, map projections and datums); and Grid Extractor (a binary executable capable of extracting MGRS grids from multiple free text documents and importing them into a Microsoft Excel spreadsheet) to their computers. The government has used this alleged conduct to charge PFC Manning with two Specifications of a violation of Article 92.

5. The defense has previously requested any Brady or Jencks material in the government’s possession. Brady v. Maryland, 373 U.S. 83 (1963) (holding that due process requires the Government to turn over exculpatory evidence in its possession); Jencks v. United States, 353 U.S. 657 (1957) (holding that, in a criminal prosecution, the government may not withhold documents relied upon by government witnesses, even where disclosure of those documents might damage national security matters). Under military law, the trial counsel has an affirmative obligation to seek out requested evidence by the defense that is in the possession of the government even if that evidence is not already in the immediate possession of the trial counsel. United States v. Williams, 50 M.J. 436, 441 (C.A.A.F. 1999); United States v. Bryan, 868 F.2d 1032, 10361 9th Cir. 1989); United States v. Brooks, 966F.2d,1500, 1503 (1992)(the government is considered to have possession of information that is in the control of agencies that are “closely aligned with the prosecution”). The defense specifically requests the below listed information from the government that is in control of agencies that are closely aligned with this prosecution. The trial counsel has responded with a blanket denial of the requested information despite the fact that this information clearly impacts not only on the form and proper disposition of the charges, but also represents clear Brady and Jencks material: 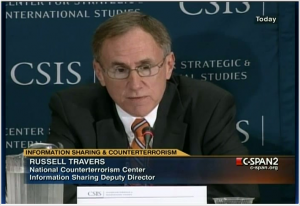 c. Department of Defense: Early on in the investigation, the Department of Defense reached out for assistance from the Department of State, the Federal Bureau of Investigation, the Defense Intelligence Agency, the Office of the National Counterintelligence Executive and XXXXXXXXXX [CIA See Defense Reply to Government Response to Defense Motion to Compel Discovery No. 2, May 10, 2012]. The defense is entitled to receive any forensic results and investigative reports by any of the cooperating agencies in this investigation. United States v. Williams, 50 M.J. 436, 441(C.A.A.F. 1999); United States v. Bryan,868 F.2d 1032,1036 (9th Cir. 1989); United States v. Brooks, 966F.2d 1500, 1503 (1992); Article 46, Uniform Code of Military Justice (UCMJ). Finally,

XXXXXXXXXX [ROBERT GATES] on 29 July 2010 directed the Defense Intelligence Agency to lead a comprehensive review of the documents allegedly given to Wikileaks and to coordinate under the Information Review Task Force (IRTF, formerly TF 725) to conduct a complete damage review. The results of this damage review undercut the testimony of each of the representatives from the OCA for the charged documents in this case. Specifically, the damage assessment concluded that all of the information allegedly leaked was either dated, represented low-level opinions, or was already commonly understood and known due to previous public disclosures.

d. Department of Justice: The defense requests any and all documentation related to the Department of Justice investigation into the alleged leaks by Wikileaks as referenced by XXXXXXXXXX [WHAT/WHO IS THIS?] to include any grand jury testimony and any information relating to any 18 U.S.C. 2703(d) order or any search warrant by the government of Twitter, Facebook, Google or any other social media site. Brady v. Maryland, 373 U.S. 83 (1963); Jencks v. United States, 353 U.S. 657 (1957);

e. Department of State: The Department of State formed a task force of over 120 individuals to review each released diplomatic cable. The task force conducted a damage assessment of the leaked cables and concluded that the information leaked either represented low-level opinions or was already commonly known due to previous public disclosures. According to published reports in multiple new agencies, including the Associated Press, The Huffington Post, and Reuters, internal U.S. Government reviews by the Department of Defense and the Department of State have determined that the leak of diplomatic cables caused only limited damage to U.S.interests abroad, despite the Obama administration’s public statements to the contrary. “A congressional official briefed on the reviews stated that the administration felt compelled to say publicly that the revelations had seriously damaged American interests in order to bolster legal efforts to shut down the Wikileaks website and bring charges against the leakers. According to the published account ‘We were told (the impact of Wikileaks revelations) was embarrassing but not damaging,’ said the official, who attended a briefing given in late 2010 by State Department officials. National security officials familiar with the damage assessments being conducted by defense and intelligence agencies told Reuters the reviews so far have shown “pockets” of short-term damage, some of it potentially harmful.” See generally, htp://www/huffingtonpost.com/2011/01/19/us-official-wikileaks-rev_n_810778.html. This determination is at odds with the classification review conducted by the OCA. XXXXXXXXXX [WHO IS THIS? ]

6. The defense has requested a copy of the Damage Assessment of Compromised Information that is required to be submitted to the Special Security Officer (SSO) under DoD 5105.21-M-1 once an SCI Security Official determines that a security violation has occurred. The damage assessment is supposed to contain the date of the assessment; the name and office symbol conducting the assessment; subject/title, date, number, originator and original classification of document; whether the document can be declassified or downgraded, either in whole or in part; justification for classification (the specific statements in the document which are classified, the basis for classification, and a complete bibliography of all classified source materials used in preparation of the document); whether the classified information identified is accurate; whether the classified information identified was the subject of any official release; and whether the information identified as classified can be edited for the purpose of prosecution. The government has not yet provided this information to the defense. This information should be ordered produced for the consideration of the Investigating Officer at the Article 32.

7. The defense requested a copy of the final security violation investigation report submitted to the SSO DoD/ Defense Intelligence Agency under DoD 5105.21-M-1. The report is used to assess intent, location of the incident, risk of compromise, sensitivity of information, and mitigating factors in arriving at a final analysis of the incident. The government has not yet provided this information to the defense. This information should be ordered produced for the consideration of the Investigating Officer at the Article 32.

8. The defense has previously requested any known evidence tending to diminish credibility of any Government witness including, but not limited to, prior convictions under Military Rule of Evidence (M.R.E.) 609, evidence of other character, conduct, or bias bearing on witness credibility under M.R.E. 608. Specifically, the defense requests the name and contact information for any law enforcement agent working with XXXXXXXXXX [WHO IS THIS?]. See Brady v. Maryland, 373 U.S. 83 (1963); United States v. Agurs, 427 U.S. 97 (1976).